Carolina Hurricanes are the new talk of the town after their post-game win celebration at the PNC Arena. Justin Williams; The Hurricanes Forward said, “We will probably throw in a few wrinkles here and there”. 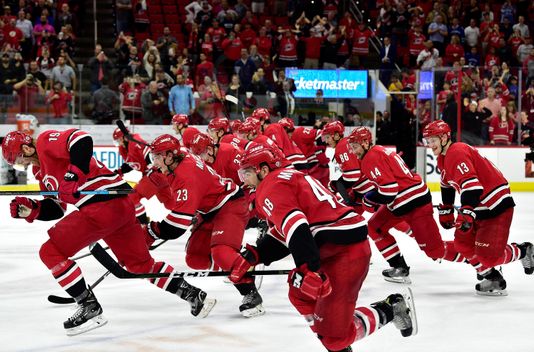 Hurricanes instead of leaving the benches and waving their sticks to fans like in other arenas, lined up at the blue line. After that, they raced down the ice and slam their bodies against the plexiglass wall behind the net.

Williams also said, “It’s still early. We are going to have to get some kinks out to get it the way we want it.”

He also said, “We are doing it by the committee”.

This all started as the Hurricanes wanted to add some fresh culture to the game.

Watch the video of their unique celebration down below.

Puck Kid 3; another adult steals the puck from a young Capitals fan
Brian Boyle Centre of New Jersey Devils says ‘my cancer is in remission’
To Top