James Anderson in his fifth test against India was fined for his clash with umpire Kumar Dharmasena. The fine is for the 15 percent of Anderson’s total match fee.

The English player who could on Sunday become one of the lead wicket taking fast bowlers; received this fine after his reaction to Virat Kholi not being given an Out during the first innings review.

With two wickets on the Saturday match, Anderson was able to move past two for Glenn McGrath’s total record of having 563 test wickets. However he was clearly angry at the reprieve of Virat Kholi on leg in the 29th over.

Anderson called out Dharmasena for giving a ‘Not Out’ to Kholi.

ICC (International Cricket Council) released a statement that “James Anderson was fined for his breach of the Article 2.1.5 of the ICC Code of Conduct for Players and Players Support Personnel. This article relates to ‘showing dissent at an umpire’s decision during an international match’”.

The statement further stated that, “one demerit point has been add in fast bowler’s disciplinary record as it was his first offense since the revision of code back in September 2016.”

The incident happened after the 29th over when Anderson in an angry manner snatched hi cap and jumper from umpire and talked aggressively with him on his review of giving a Not Out to Virat Kholi. 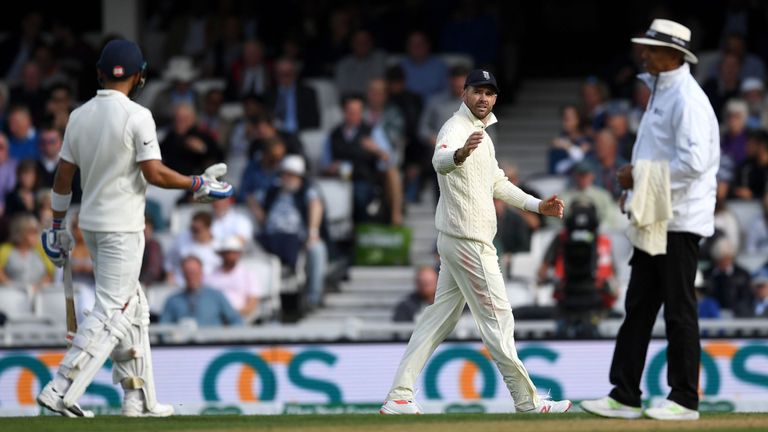 As Anderson admitted to his offence and also accepted the sanction proposed; no formal hearing was needed.

The charges were leveled up o the field by umpires of Emirates Elite Panel of ICC Umpires; Kumar Dharmasena, Joel Winston, Bruce Oxenford and Tim Robinson.

This type of level 1 breach leads to a maximum penalty of 50 percent of a player’s match fee along with one or two demerit points.